Learn about indigenous cultures with our lectures

Tribal Art London is excited to connect globally with experts and creatives to discuss the history, current market and future of indigenous art.

We hope our programme of lectures inspires and informs, bringing the objects on exhibition to life. This year’s programme focuses on the influence of modernity on ritual, aesthetics and societal structure. The objects displayed at Tribal Art London were and are in many cases still very much part of the everyday lives of the peoples who created them. Exploring ritual evolution and adaptation the lectures connect the ancestral to modern day practices.
‍
All talks are free and will be made live on the scheduled day of the talk. Times and further details are below, as are links to books and upcoming exhibitions discussed in the talks. 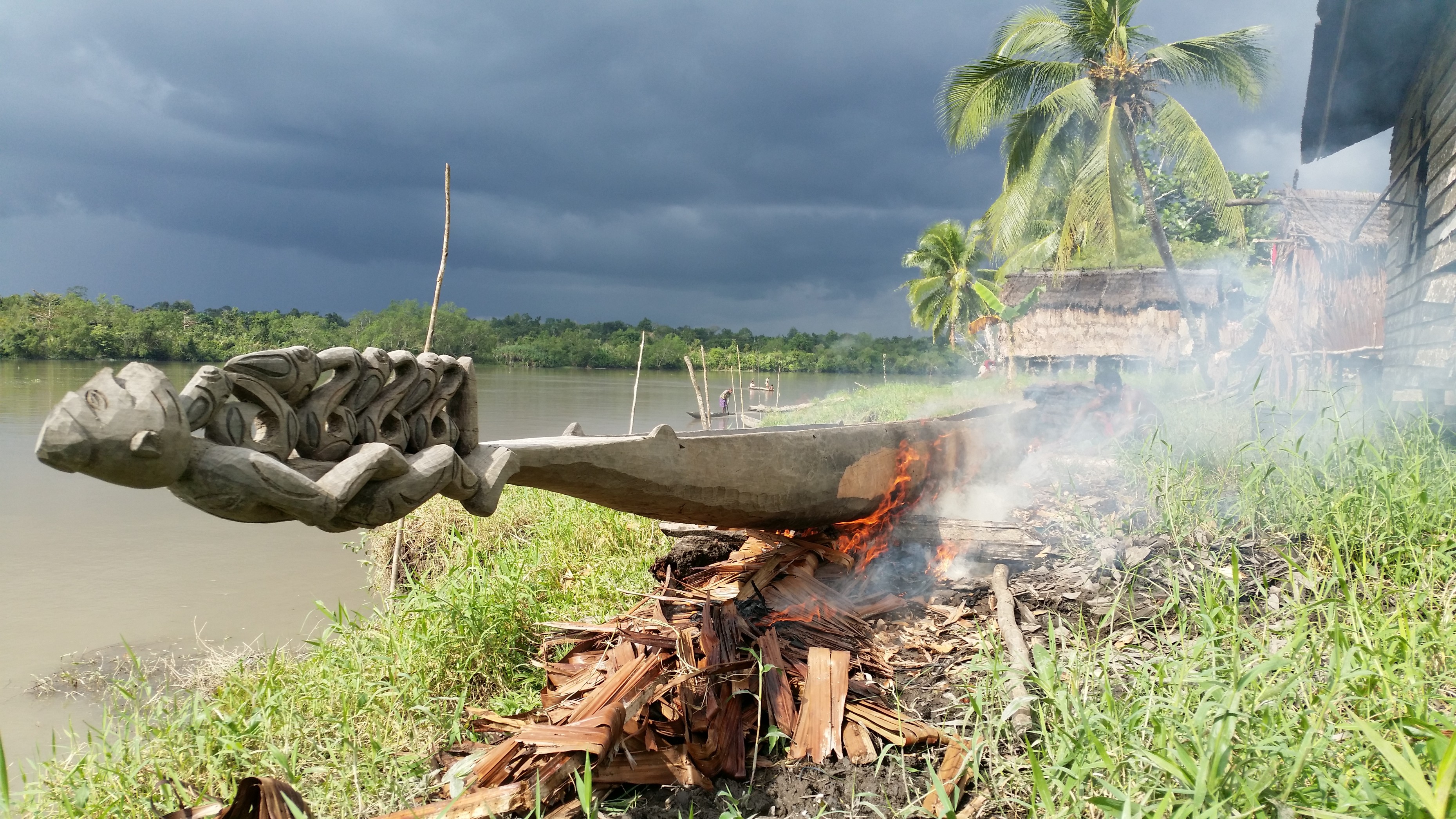 Asmat woodcarving is widely collected and exhibited in museums. However, how Asmat people themselves think about carving is little understood. Tom Powell Davies presentation examines the role that carving plays in Asmat people’s lives, and in particular, how carving is used to navigate relations with ancestral spirits. I analyse how woodcarving’s aesthetic features are founded in Asmat understandings of how life itself is animated, and how carving is used as communicative tool to engage with otherwise non-visible spirits, which are experienced as determining the outcome of life events.

Tom Powell Davies is a final year PhD student at the University of Cambridge’s Department of Social Anthropology, and founder and convenor of the ‘Risk and Renewal in the Pacific’ research network at the university’s Centre for Research in the Arts, Social Sciences and Humanities. He has conducted two years of ethnographic fieldwork in Asmat, Indonesian Papua, studying the relationship between customary ritual, Catholicism and the state, from the point of view of the categories of time and space. In addition, he has produced research collections for several ethnographic museums in the UK, Netherlands, and Indonesia. Most recently, Tom has curated the exhibition Church and the ancestors: Sacred pir mats from Asmat, Papua, Indonesia currently on display at the University of Cambridge’s Museum of Archaeology and Anthropology. 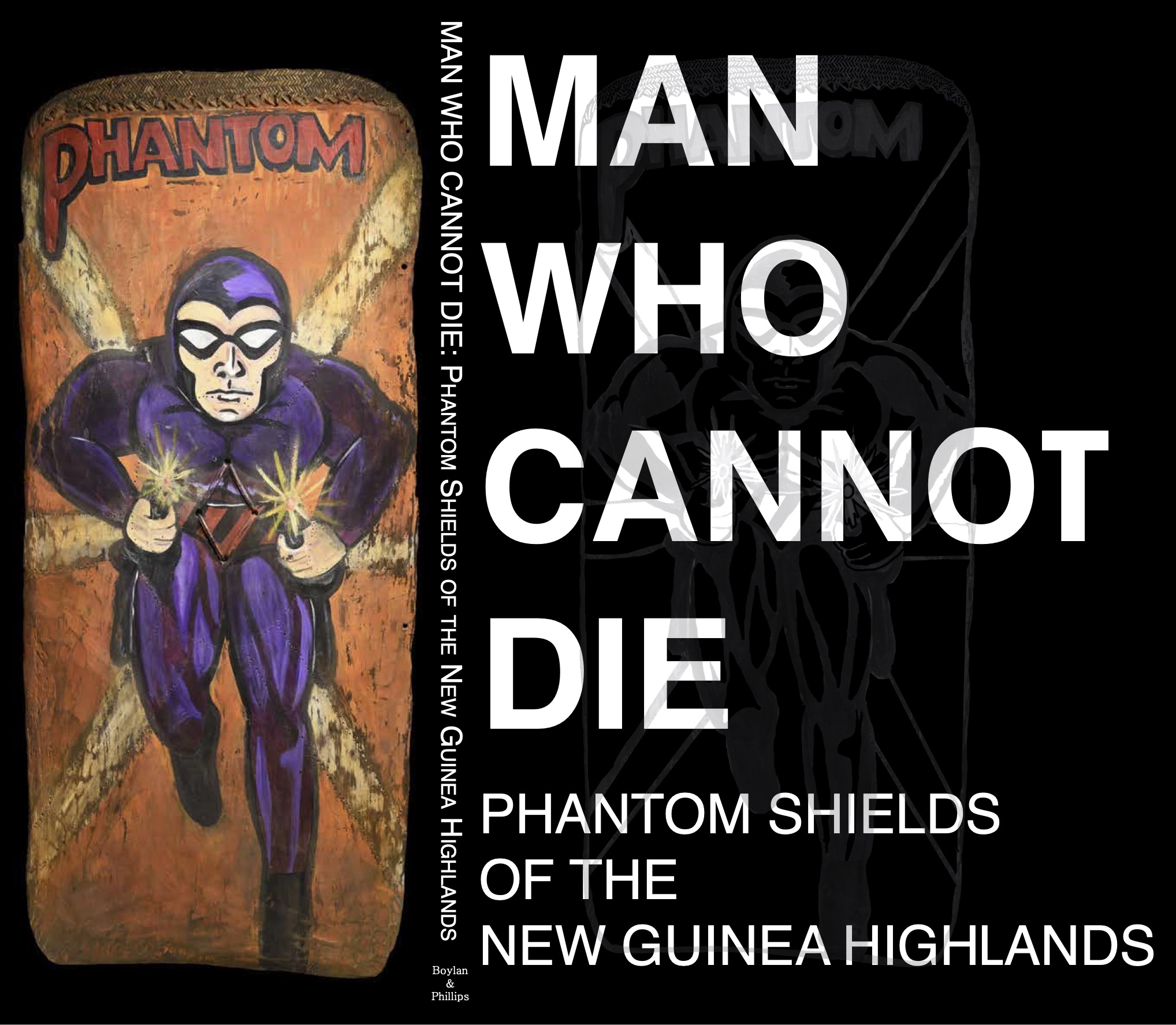 In the second half of the twentieth century, an artistic tradition arose in the Wahgi Valley of the highlands of Papua New Guinea of painting traditional war shields with the image of the comic book superhero The Phantom. This derived from some seemingly inexplicable intersection of the age-old bellicose traditions of one of the most culturally remote areas of the world and twentieth-century comic book illustration, if not pop art—a phenomenon that art historian N. F. Karlins has referred to as pop tribal.

A new book published in February 2021 by art dealers Chris Boylan of Sydney, Australia, and Jessica Lindsay Phillips of Toronto, Canada, is an exhaustive study of this tradition. Titled Man Who Cannot Die: Phantom Shields of the New Guinea Highlands, it features essays by a number of experts in the field, placing the shields within their historical, cultural, and cosmological contexts. A catalog section illustrates 105 examples from museum and private collections in North America, Europe, and the Antipodes, drawn from a research group of some 150 shields, which represent the majority of known examples.

Boylan, field collected many of the known examples, and he discusses the circumstances of their history, use, and discovery. Phillips helped place a remarkable number of the shields in collections in the Toronto area and beyond, and will speak about the acquisition and placement of these shields in Western collections.

Research for the book resulted in the identification of a number of different artists, distinguishable by their styles. 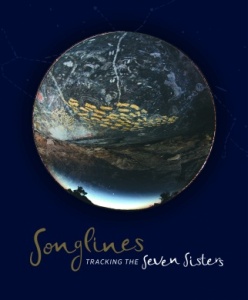 Margo Neale, Senior Indigenous Curator at the National Museum of Australia and custodial elders from across the Central and Western Deserts of Australia.

Curator, Margo Neale guides us through the 'Songlines: Tracking the Seven Sisters' exhibition giving an insight into the conception and creation of this award-winning exhibition.

'Songlines: Tracking the Seven Sisters' was inspired by an investigative collaboration between senior custodians of Martu country and Anangu Pitjantjatjara Yankunytjatjara (APY) and Ngaanyatjarra lands of Australia’s Central and Western deserts, along with the National Museum of Australia, the Australian National University and other partners.

With 300 paintings and objects, including ceramics, paintings and videos by over 100 different artists this indigenously led exhibition crosses three states, three deserts and some 500,000 square kilometres in a truly inspiring and epic journey. Central to the exhibition are the Seven Sisters Dreaming stories – ancient creation sagas of the Australian continent - and the aim to preserve them for future generations.

'Songlines: Tracking the Seven Sisters' is part of the UK/Australia Season 2021-22 - a major programme of cultural exchange taking place across the two nations throughout this year and next. The first exhibition of its kind, attempting to tell in an exhibition space an Indigenous founding narrative by using Indigenous ways of passing on knowledge.

'Songlines: Tracking the Seven Sisters' will exhibit at The Box and The Levinsky Gallery from the Thurs 21 Oct - Sun 27 Feb. 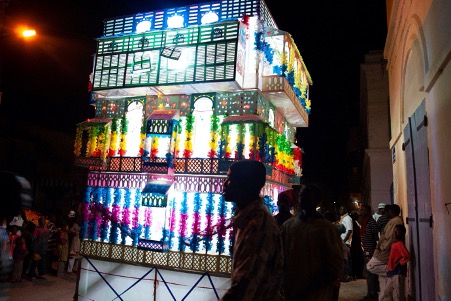 Around Christmas, craftsmen in Saint-Louis make lanterns of wood and paper that are paraded around town in honour of their patrons. In this lecture, Ferdinand de Jong discusses the history of the lantern festival, the making of the lanterns, and why the lanterns are made in the image of colonial architecture. The lanterns serve a purpose that does not escape their observers: they materialize the patrons, who are thus presented as ‘shining lights’.

The lecture is based on De Jong’s forthcoming book Decolonizing Heritage: Time to Repair in Senegal (Cambridge University Press, February 2022).